Winterization and Freeze Protection of Piping, Tanks, and Instrumentation 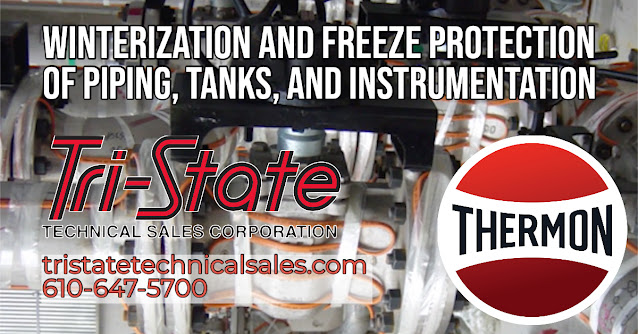 Winterization and freeze protection of piping, tanks, and instrumentation is a common requirement in many process plants, particularly those with significant systems in the plant exposed to harsh weather. Freeze protection applies heat to pipes, tanks, or vessels to offset the thermal insulation loss. Heat always transfers from hot to cold. The risk of a freeze-up often gets ignored because the result may not be critical to plant operation or personnel. Safety examples of such applications include drinking water drain lines and effluent systems. However, many other winterization systems can be crucial to personnel safety and plant operation. For example, a major chemical company in North Carolina in the United States once suffered a freeze-up on an electrical heat traced boiler level-sensing instrument line. This small problem cascaded into a boiler shutdown, which led to a freeze-up of the entire plant due to the widely applied steam tracing within the facility. After being down for two weeks, they accrued almost 5 million dollars in total losses.

Contrary to popular belief, heat tracing is generally not intended to increase process temperatures. Instead, it keeps a pipe or vessel from cooling down. The heat input offsets the heat loss naturally through the thermal insulation and maintains thermal equilibrium during the minimum conditions. Thermal equilibrium is the balance between the heat lost through the thermal insulation and heat returned to the system via a heat source. Typically, this heat source is a heat tracer. Many refineries and chemical plants still select low-pressure steam tracing for their winterization. However, most new freeze protection system installations rely on electrical heat tracing. The essential components of an electrically traced system include:

Standard methods to control the freeze protection system can be with manual on/off devices, such as the circuit breaker, or automatic control via ambient sensing thermostat, which may control a contactor and the entire electrical distribution panel. Regardless of the heat tracing method, one of the most critical components of any heat tracing system is thermal insulation. Due to the tendency to have the heat tracing and insulation assigned separate trades or contractors, some performance concerns are possible unless the installers responsible for both areas have adequate training. For additional information on freeze protection solutions or other applications that require heat trace, visit us on the web https://tristatetechnicalsales.com or call 610-647-5700